How stagflation can impact our financial wellbeing 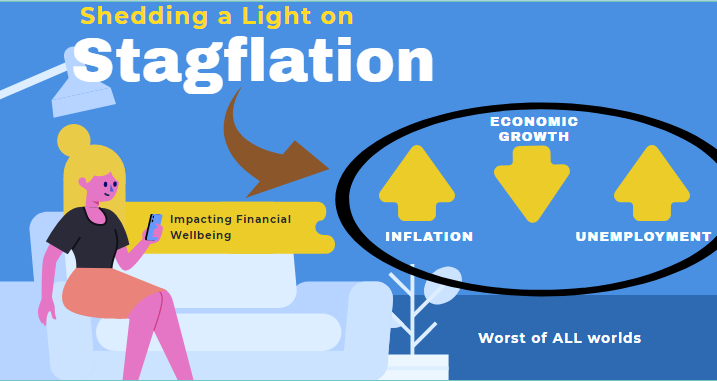 How stagflation can impact our financial wellbeing

Stagflation can have a significantly negative impact on our economy and personal financial wellbeing. In our economy, prices for goods and services can rise and fall. In Ireland, we have seen this occur with the price of petrol, diesel, and home heating oil. It has also happened in respect to the price of property. Following the so-called ‘credit crunch’ and ensuing recession, the price of property in Ireland fell by as much as half (50%).

Broadly, it’s existence keeps economists awake at night and is the stuff of nightmares for them…and how it can be resolved. Additionally, measures that might be deployed to lower the rate of inflation (a rise in interest rates) can end up exacerbating the rate of unemployment.

There is little doubt inflation has increased over the course of the last 12 months. Across the Eurozone, inflation is about 3% today. This is driven in large part by a combination of factors, primarily the supply of a whole range of goods and materials. For example, Covid-19 resulted in large parts of economic production to cease, and manufacturers slowed and even ceased production of certain goods and materials. Other factors also played a role as consumers stopped spending and saved enormous amounts of money during coronavirus lockdowns that lasted months. This means that both supply and demand was severely disrupted and now those economies are slowly getting back to relative normal, the economic impact is getting a little clearer.

One example of the impact can be seen in the price of timber. It increased sharply as construction firms began building again. But timber suppliers, many of whom were in lockdown also began to fall behind on deliveries, thus creating shortage. It other words, it became a ‘sellers’ market’ resulting in price rises. Thankfully, timber prices have fallen back from their highs as producers began to replenish stocks and meet market demand.

The big question is whether the current rise in inflation is likely to continue unabated or is just a short-term phenomenon. If it’s mainly because of short-term production issues, those are likely to get resolved in the next 6 – 12 months. If that is the case, we are unlikely to experience the real impact of true ‘stagflation’.

From a personal finance perspective, were stagflation to take hold, it would have a very significant and negative impact on the value of money held in savings, income, pension payments and even employment prospects. As inflation erodes the buying power of money, the real value of money held on deposit falls in tandem with the prevailing rate of inflation. Income is also impacted as the buying power for each €1 falls. People in retirement, on a fixed income will also be vulnerable to the fall in the value of their pension income. As for those starting out in life, some may find it more of a challenge to gain employment.

It is still way too early to make any meaningful assessment as to whether we are entering a period of stagflation. What we do know is that economists have developed many fiscal and monetary tools to tackle such economic threats. They are very sensitive to the risks stagflation bring and are broadly ready to deploy as many resources as necessary to take on the challenge. So, for now, the best thing people can do is stay safe and get back to normal as best they can.

Return to office doesn’t have to mean a return to old spending  Next Post :
Previous Post :   How does financial I.Q. impact financial wellbeing?